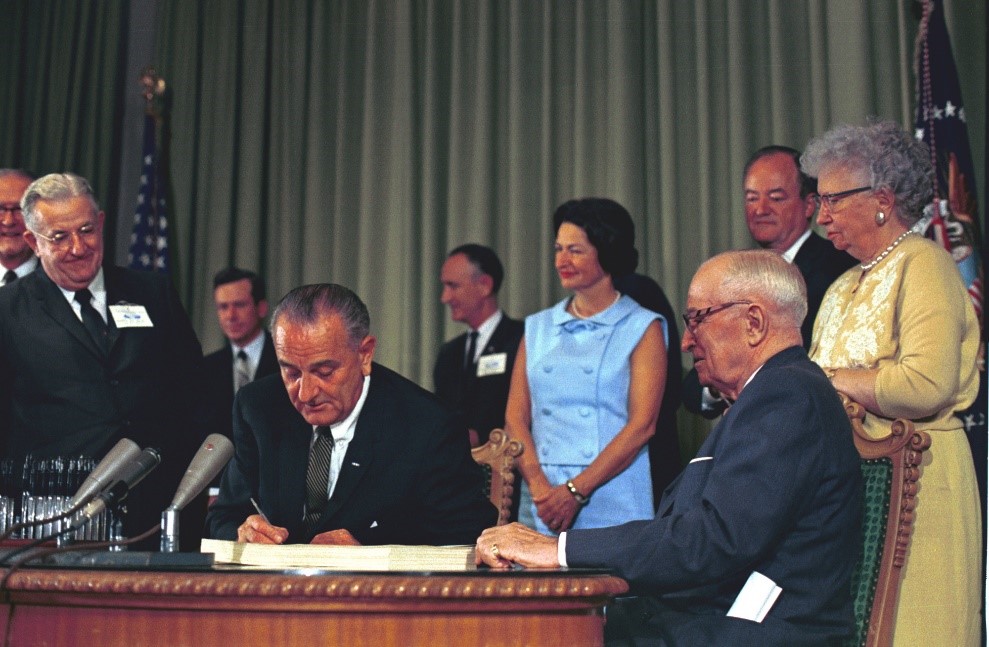 President Lyndon Johnson enacts the Civil Rights Act of 1964 which outlaws discrimination based on race, color, religion, sex, or national origin. The law prohibits unequal application of voter registration requirements, and racial segregation in schools, employment, and public accommodations. Title VI of the act prevents discrimination by programs and activities that receive federal funds, including hospitals and other health care facilities.

“The Hill Burton Statute itself, passed in 1946 during the Truman administration permitted the building of hospitals with “separate but equal” facilities for blacks and whites. A black dentist in North Carolina challenged the law as unconstitutional in federal courts and lost in the case Simpson vs. Moses Cone Memorial Hospital. Robert Kennedy was Attorney General at the time of the suit in 1963. He was incensed and filed an Amicus brief on behalf of the United States in the court of Appeals. The appeal was successful in declaring the law unconstitutional. Jack Kennedy shared his brother’s consternation and urged Congress to pass a bill prohibiting discrimination in any program receiving federal financial assistance. That became Title VI of the 1964 Civil Rights Act.  After the assassination of John Kennedy and later Robert Kennedy, Lyndon Johnson assumed the Presidency. He said he was going to do two things: Implement Title VI of the 1964 Civil Rights Act, and enact a Health insurance program for seniors called Medicare. The AMA fought him tooth and nail saying it would lead to socialism. The truth is, they wanted to resist desegregation of hospitals. Lyndon Johnson’s role in beating them down and getting the legislation passed in 1965 was heroic. He was the one who set up the Office for Civil Rights in the Department of HEW to contest segregated wards. When the Medicare bill was signed in 1965 he did not invite a single member of the AMA. Instead he invited Dr. William Montague Cobb, MD who was a terrific champion of equal justice for blacks and black physicians and dismantling of segregated hospitals.” – Sylvia Drew Ivie, Former Executive Director of the National Health Law Program, 2018